Without my family I would not be an artist. My father was a carpenter and when I was a child, I drew pictures, using his carpentry pencils while he worked beside me. He often would show me how to draw simple shapes and animals such as dogs, cats, chickens and other farm animals.

Later, as I grew, I continued to draw and paint with oil on canvas, focusing on family and friends as my subjects. When my parents divorced, I realized the importance of family members' affection towards one another. The family became extended, in my mind, to include my friends. This affection for and memory of family and friends became my primary subject as I matured into my artistry.

These paintings reveal this theme and especially the necessity of compassion in order to raise happy children. A child asleep in the arms of his or her parents, is the epitome of this love. Without a family or friends, we are adrift in a sea of anonymity and despair.

In particular, the beauty of being a mother is her opportunity to take care of her child and to hold her in her two arms of love. The happiness of a mother is to see her child growing up to become a confident adult. Every act of the mother is full of care. A mother’s hope is that her child’s happiness leads the child to life’s goodness, including the goodness of friends and, eventually, her own family. The mother is not alone in her care for the child: all the angels join her in protecting and blessing the little one. 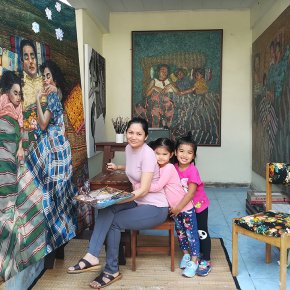